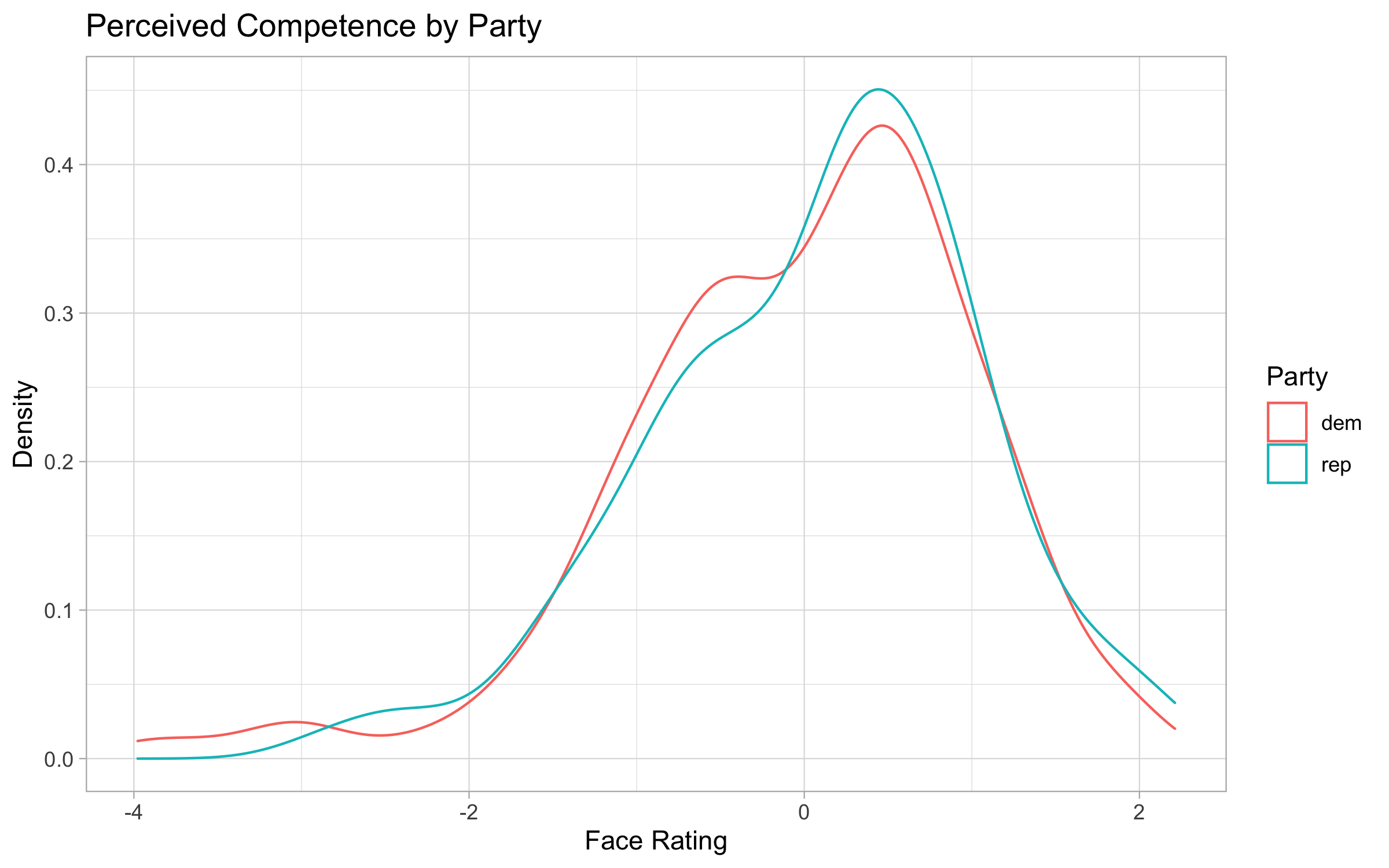 This new blog series revolves around political psychology. I will explore questions and data to try and gain a better understanding of how voters think and the history of political behavior in the United States. For the first blog, I’ll be exploring how System 1 and System 2 thinking affect how voters perceive candidates. More specifically, I’ll be exploring competence from faces from Todorov, et al. (2005).

Before I begin exploring the data behind Todorov, et al. evaluating competence from faces, I will explain a bit of the psychological theory behind human thinking at a very broad level. Let’s start with System 1 and System 2 thinking. Popularized by Daniel Kahneman in Kahneman (2003), the idea splits human thinking into two categories. System 1 thinking is fast and automatic, our intuition, and System 2 thinking is slow and calculated, our reasoning. Most of the time, our brains function using System 1 thinking because it is easy and effortless while still making relatively good decisions. However, we resort to System 2 when we have to do more analysis or reasoning such as taking a test or solving a riddle. But how about when it comes to choosing which candidate to vote for? (We’ll get to that later.)

Another way that the brain relies on System 1 thinking is through heuristics or the idea of using a mental shortcut to reach an answer. There are many different types of heuristics such as the availability or recency heuristic, based on what’s the most easily accessible thought that comes to mind. For example, in politics, research from Bartels (2017) shows that economic growth one year prior to presidential elections are a better metric to predict how well the incumbent will do compared to the economic growth across all four years of a presidency. (If you want to learn more about this research, I wrote about it in a blog post previously.)

So how do different types of thinking and heuristics affect how people choose for who to vote for?

In Todorov, et al. (2005), the authors conduct an experiment to test their hypothesis that “If voters evaluate politicians on competence, inferences of competence from facial appearance could influence their voting decisions” (1624). In this test, respondents were shown a pair of faces (the front runners in a variety of elections) and asked which candidate they thought looked more competent. The results showed that candidates who were perceived as more competent won 71.6% of Senate elections and 66.8% of House races (1624). These results show that System 1 thinking and heuristics play a critical role in how some Americans vote at the polls. The authors concluded that against previous belief, voters do not always rely on a calculated System 2 way of thinking when choosing who to vote for in an election.

Is there a difference between the perceived competence of non-incumbent candidate faces in tossup vs. non-tossup races?

Looking at the main research finding from Atkinson et al. (2009), we can see the higher perceived competence score of non-incumbent candidates in tossup races on average and a lower perceived competence score of non-incumbent candidates in non-tossup races on average. From a practicality standpoint, this makes a lot of sense. When a challenger is trying to unseat an incumbent in an election, they need all the advantage that they can get. So, based on the research, having a higher quality face can lead to a higher perceived competence score which then could draw in more voters. So the next time that you see a tossup election on the news, you might ask yourself which candidate looks more competent and see if they end up winning in the end.

Atkinson et al. (2009, 236) suggest that “…incumbents from the most competitive districts would have higher facial quality than incumbents from the most safe incumbent districts due to the selection process of better faces to competitive districts, inducing a negative relationship between incumbent face and incumbent vote.” To evaluate if the data supports this idea, I used the cook variable, the assessment of the Senate race from the Cook Political Report in the year prior to the election, and categorized them into four categories: “Solid”, “Likely”, “Lean”, and “Tossup” to define the competitiveness of each race in the dataset. In my plot above, I find that the data does not fully support this idea that seat safety is negatively correlated with incumbent facial quality. Rather, the average incumbent facial quality across the four categories of competitiveness that I defined were relatively steady with a score of around 0.25.