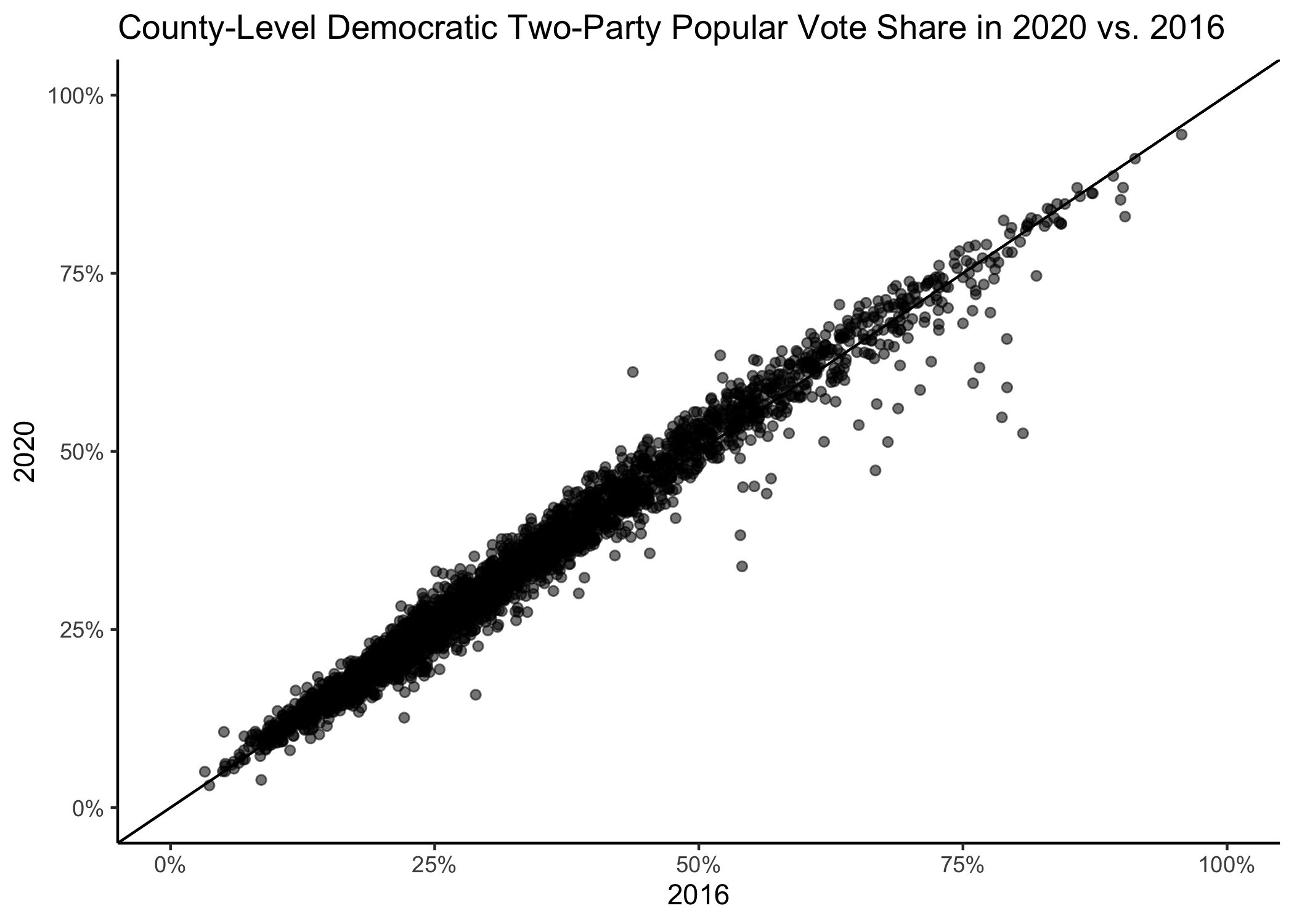 The fall semester is wrapping up and this will be my final blog post for Gov 1347. After 10 blogs, I can’t help but stop and appreciate just how much I’ve learned in the past three months and all the fun I had writing these. So, even though this chapter is coming to an end, I’m excited to see what my next blog post might entail. For this final Gov 1347 post, I will be evaluating and testing the post-election narrative that COVID-19 was the main cause of Trump’s loss to Biden. I’ll start with a comparison of the 2020 and 2016 election results. Then, I’ll pull in county-level data and evaluate connections between the 2020 election and covid.

The narrative I will focus on is that Biden won because of Trump’s mishandling of the COVID-19 pandemic. To begin, there is no doubt that covid was one of the major issues in this election (as seen here and here just for example). The New York Times presents Edison Research’s national exit poll, which had multiple questions relating to the pandemic. Each of these question showed the deep divide between Trump voters and Biden voters on the issue, where Trump voters overwhelmingly answered that the pandemic handling was going well and Biden voters responded that it was not.

A quick flashback to the U.S. covid numbers on November 3: the country was just on the edge of crossing back into 100k daily confirmed cases (It would cross this threshold the next day), just over 50k people were hospitalized, and almost a quarter of a million people had died from the virus. Given these numbers, it is still surprising that about half of the electorate thought the handling of the pandemic under the Trump Administration was going well. In comparison with other countries, the U.S. handling might be at best classified as ok and at worst classified as terrible, depending on which countries you compare with.

So, this brings us back to the post-election narrative: did Biden win the 2020 election because of the Trump Administration’s poor handling of the COVID-19 pandemic? I’ll start by comparing the initial 2020 election results with the 2016 election results to see if any counties voted very differently in 2020.

Before poking around the 2020 county-level data, I already had a hypothesis about what the results would look like. Given Trump’s unusually stable approval ratings throughout his term and the fact that the two party-popular vote results were nearly identical to the 2016 results, I was expecting the county-level results to be very similar. The results were just as I expected, and even slightly surprising. I plot the democratic two-party vote share between 2020 and 2016 below:

As we can see, the trends seem to be very similar - exactly following my initial thoughts. There even appears to be more counties that voted even more for Trump in 2020 at first glance (the points below the curve). However, if you look closely, you can see that there was a very slightly shift in favor of Biden in the majority of counties. This can be explained by uniform partisan swing, the idea that districts tend to vote together in favor of one candidate overall in the election. But, did covid cause this slight swing? Well, that question becomes much much more difficult to answer.

Being one of the most important issues of 2020, one might expect covid to be the easy answer to Biden’s victory. However, there is a lot of evidence that suggests otherwise. First, the exit polls showed that there was a deep partisan divide in the electorate this year. Out of the 17% that responded with covid being the top issue for them, 81% of them voted for Biden, but only 15% voted for Trump. Second, this deep divide can also be seen in Trump’s steady approval ratings. Third, demographic voting data further points away from the covid narrative. Brookings did an analysis of how different demographic blocks voted in 2020, and it seems that Biden did better than Clinton overall. However, the biggest base that Biden did better with was men with college degrees.

Was covid the biggest issue for men with college degrees in the 2020 election? Evidence from Gallup and Dartmouth on how men and women feel about covid suggest the opposite - women tend to be more worried about the pandemic than men.

So far, I haven’t found any evidence that covid was the main reason that Biden won the election. However, 2020 had record-breaking turnout numbers. So, perhaps covid was the main cause to this turnout? I try to evaluate this next hypothesis by creating a plot of the turnout change from 2016 to 2020 versus covid cases at the county level:

At first glance, there didn’t seem to be any relationship between the two variables. The turnout increase appear to be uniform, further supporting the theory that the electorate moves in uniform. But, out of curiosity, I also created a plot of turnout versus population because I know that larger areas such as cities tend to have higher turnout rates in general. The results supported exactly that:

This plot is almost identical to the covid plot ann that makes sense because places with more people tend to have more covid cases. While it’s still not enough evidence to fully disprove the covid narrative, it doesn’t support the narrative either. The next and final thing I look at is the historical trends in democratic two-party vote share in counties by population.

The final plot I create compares the democratic vote share and population per county from 2000 to 2020. This provides the last piece of evidence that I believe finally puts the covid narrative to rest. While covid was not the main reason that led Biden to win the election, it’s effects on the economy and it’s effect could still have had an impact on the election. It’s exact impact is impossible to quantitatively measure however.

From the animated plot, we can see that the democratic vote share increases as the population of the county increases. The biggest shift among the electorate during this period was from 2012 to 2016, where there was a huge drop in democratic vote share. From 2016 to 2020, we can see that there was only a very slight change. Many counties had small positive shifts, but there were also counties with negative shifts.

Bringing this blog into the bigger picture of presidential elections and the future of politics in the United States, the greater concern for everyone should be the extreme partisan divide. We saw this divide in 2016, but the electorate in 2020 made a statement that this divide was not a one-time thing. 2024 will be a tough election for both parties, but I worry most for the American people. The U.S. needs a leader that can united the country again, but 2020 showed that neither Biden nor Trump was that leader.