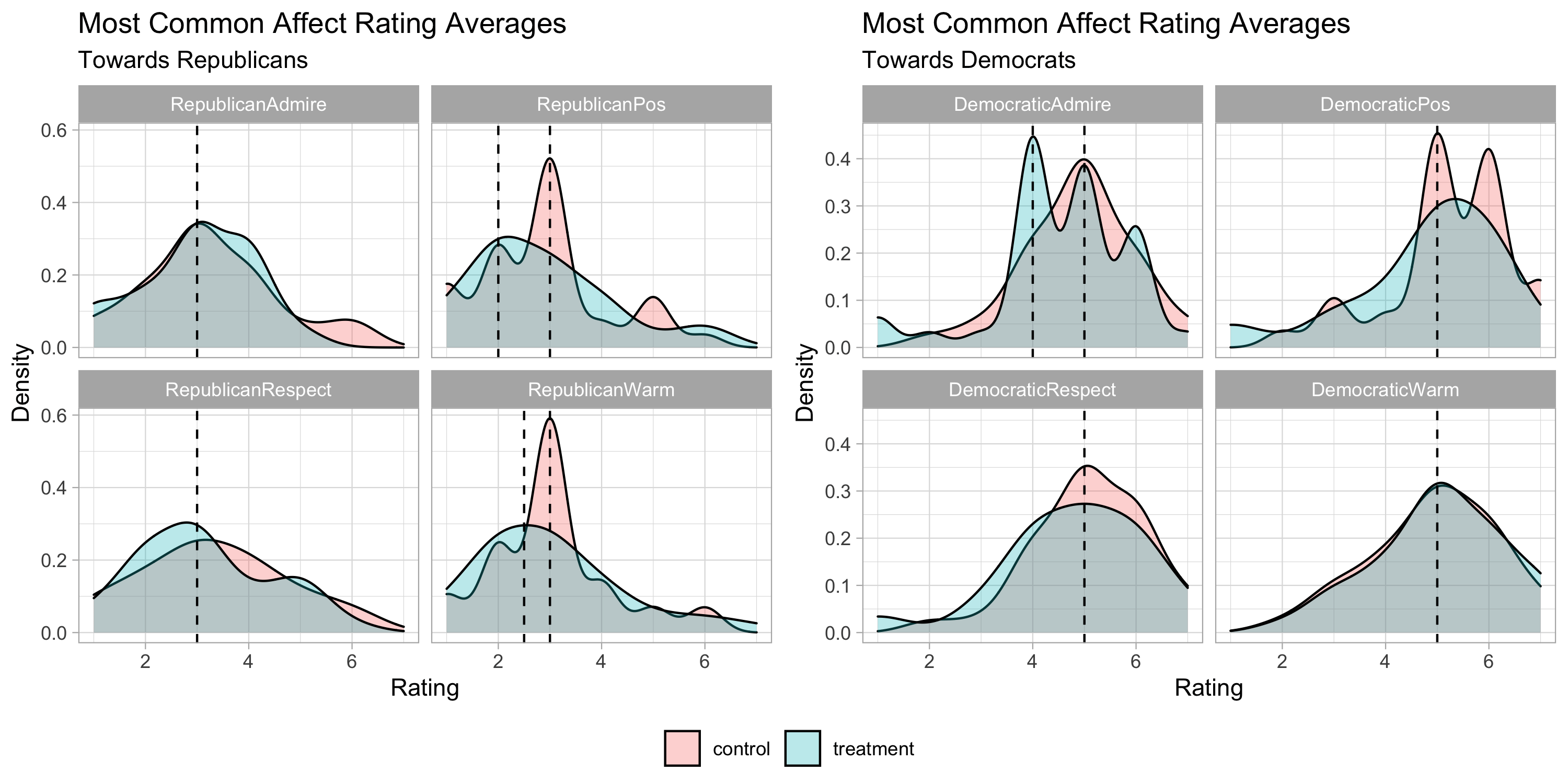 Using data from Wang et al. (2021) as a baseline, this week I explore how the effect of intergroup contact varies among different societies with data from our political psychology class. The results show that the treatment affect responses in our Harvard class have minimal differences towards Republicans compared with the control responses. This contracts the findings from Wang et al. (2021) as they found that there was a statistically significant increase in treatment affect responses towards Japanese people compared with the control responses.

The background data in this blog comes from Wang et al. (2021), where they conducted an experiment on a group of Chinese students to determine if imagined social contact could reduce antipathy toward Japanese people. The data we collected in our class tests whether imagined social contact with a member of one’s less-preferred political party would change attitudes toward members of that party. I compare the results from our class to the results from the paper to see if the same effects are seen in both experiments.

In both datasets, there are four affective feelings that are measured for each group (Japanese and Republican in this blog). These four feelings are evaluated on the following scales from 1-7:

In Wang et al. (2021), we can see that the effect of the treatment increases the affective feelings towards Japanese people. In the plot above, we see that on average the treatment leads to more positive, more admiration, and more respect at a statistically significant level (the confidence intervals do not include zero).

However, in our class dataset, we can see that the treatment has little to no effect on the affective feelings towards Republicans. I chose to evaluate Republicans instead of Democrats because the overwhelming majority of our class identify as Democrats.

Diving more deeply into the distributions of ratings for each affective feeling in both datasets, we can see some interesting trends. Here, I compare the affective feelings towards all groups in both treatment and control.

In the distribution plots for Wang et al. (2021), we can see that the treatment group gave better affective feeling ratings for Japanese people across all four feelings. However, some feeling had higher ratings on average than others (admire, positive, and respect for example). The dotted lines show the average of the most common rating(s) for each feeling.

The distribution plots for the class dataset confirms our findings earlier. We can clearly see that the treatment and control distributions for each feeling look almost identical across all four feelings. The only two minor differences might be for positive and warm attitudes, where the control had slightly better ratings on average.

From this comparison, we can see that the experiment from Wang et al. (2021) does not always hold true for each situation and group being measured. I hypothesize that these differences might also have to do with a) cultural differences between Chinese and American students and b) the fact that party identification is likely a more polarizing issue among young Americans than Japanese vs Chinese ethnicity among Chinese students. To test my hypothesis, I would be interested in increasing the sample size of my experiment and also expanding the test to more age groups. I would also be interested in conducting a longitudinal study that measures Americans’ feelings toward the outparty to see if we can identify any changes in polarization over time.